Services include the following:

One of the most important aspects of Sikhism and in that context refers to the singing of the Sacred Hymns from the Guru Granth Sahib to music.  The Sikhs place huge value on this type of singing and a Sikh is expected to listen to and/or sing Guru-Kirtan as frequently as possible.  The music used has traditionally been indian classical music which is based on raagas and taal (rythmic beat patterns).  Traditionally the indian musical instruments, harmonium and tabla, are used for this type of music.  The Sikh scriptures contain 31 raagas and 17 talas which form the basis for Kirtan music compositions.  The Guru has pronounced that Kirtan is the magical formula to keep the human soul afloat in the dark era of kaljug provided the devotee sings the pure melodies with his or her heart closely focused on the meaning and true spirit of Gurbani. ​ 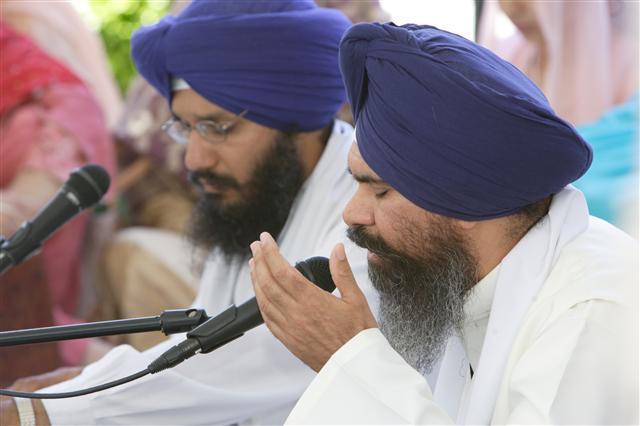 (Akhand means uninterupted without break; paath means reading) is non-stop, continuous recital of the Guru Granth Sahib from beginning to end.  Such a recital must be completed within 48 hours.  The entire Guru Granth Sahib, 1430 large pages, is read through in a continuous ceremony.  This reading must go on day and night without a moment’s intermission.  The relay of reciters who take turns saying the scriptures must ensure that no break occurs. 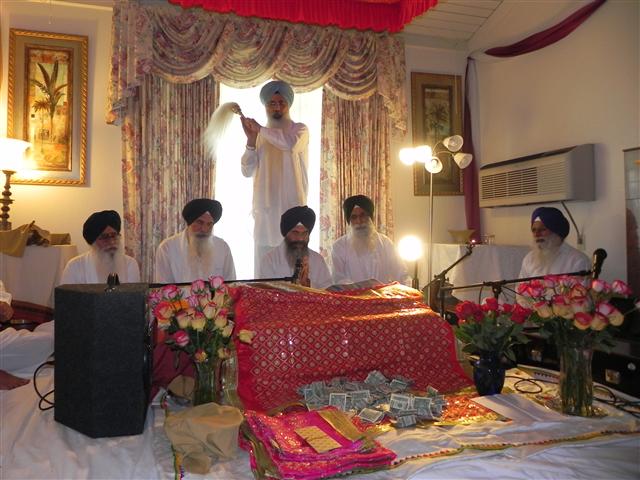 Also recitation of Guru Granth Sahib from beginning to end but it doesn’t have to be continuous.  A person or group of people can read the holy scriptures according to their schedules and complete the reading of the Guru Granth Sahib. 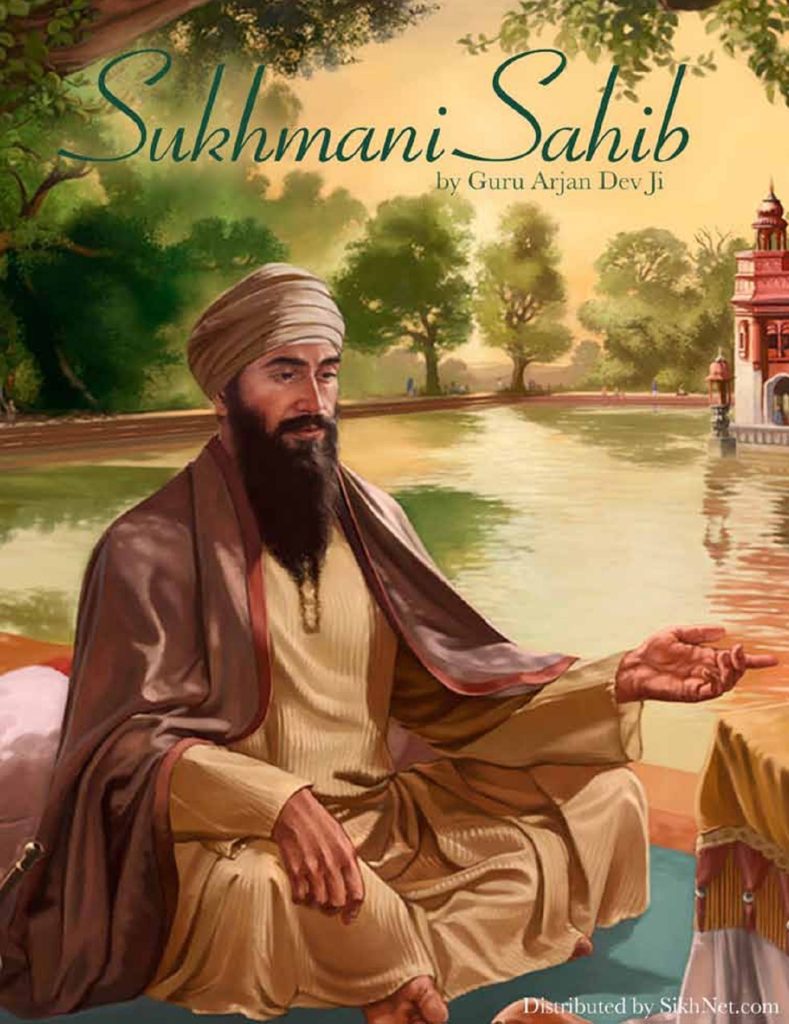 (Titled Gauri Sukhmani in the Guru Granth Sahib after the musical measure Gauri to which it belongs) is a lengthy composition by Guru Arjun Dev Ji which many include in their daily prayers.  The site, once enclosed by a dense wood, where it was composed around AD 1602-03, is still marked on the bank of the Ramsar pool in the city of Amritsar.

The word Sukhmani is rendered into English as “consoler of the mind.”  The entire Sukhmani Sahib has been translated into English more than once under the commonly preferred title “Psalm of Peace” or “Song of Peace” signifying the soothing effect it has on mind of the reader.  Sukh literally means peace or comfort and mani means mind or heart.

The Sukhmani comprises twenty-four astpadis or cantos, each comprising of eight stanzas.  They are composed in the metre chaupai.  A sloka or couplet precedes each astpadi.  The first seven stanzas of the astpadi explore the theme stated in the context of an overall vision of Eternal Reality.  This structure is maintained throughout and though from canto to canto there may not be traceable progression of thought as in a philosophical work, there is a continuing unity of spiratual and ethical tone.  As one of the fundamental texts of the Sikh faith, the Sukhmani presents a complete scheme of the teachings of the Sikh faith.  While each astpadi has a fresh vision to impart, a particular aspect of Truth to unfold, the whole text may be regarded as the reiteration of basic themes such as Divine immanence, Divine compassion, abundance of Grace, God’s succouring hand, the merit of devotion, of holy company, and humility.  With such reiteration, the composition as a whole has a remarkable gripping quality reinforced by the striking imagery which stanza after stanza brings home to the seeker the truths he must own. 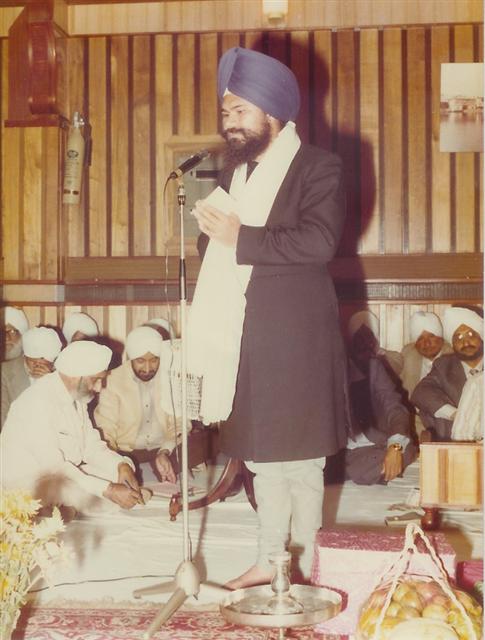 A Sikh prayer that is a done before performing or after undertaking any significant task.  Ardaas is typically performed after reciting the daily Baanis (prayers), or completion of a service like Paath, Kirtan (hymn-singing) program, or any other religious program.  The prayer is a plea to God to support and help the devotee with whatever he or she is about to undertake or has done.

The Sikh wedding ceremony.  The words literally translate as “Blissfull Union.”  The Sikh marriage is a very special ceremony in which two individuals are joined in an equal partnership.  It is a joyous and festive event which is very family oriented and can be informal in it’s atmosphere.  Sikh marriages are usually arranged with families acting as little more than introduction services.  The ultimate choice is always left to the girl and boy.  In some cases, the boy and girl choose each other first and then seek their parents’ consent and blessings.

The Rehat Maryada which is the Official Sikh Code of Conduct specifies that no thought should be given to the perspective spouses caste.  As long as both the boy and girl profess the Sikh faith, they may be joined in wedlock by the Anand Kaaraj ceremony.  The Rehat Maryada strictly forbids any sort of dowry arrangements as marriage is not to be viewed as a business transaction.  Sikhs are also discouraged from consulting horoscopes or following any other superstitions pertaining to determining a wedding date or time.  The Anand Kaaraj ceremony can be performed in any Gurdwara or home where Sri Guru Granth Sahib has been respectfully installed.  The religious ceremony cannot be performed in a hotel or banquet hall.  There are no restrictions as to what time the ceremony should start or what time it should end although they are usually performed in the morning with the religious ceremony taking no more than a few hours. 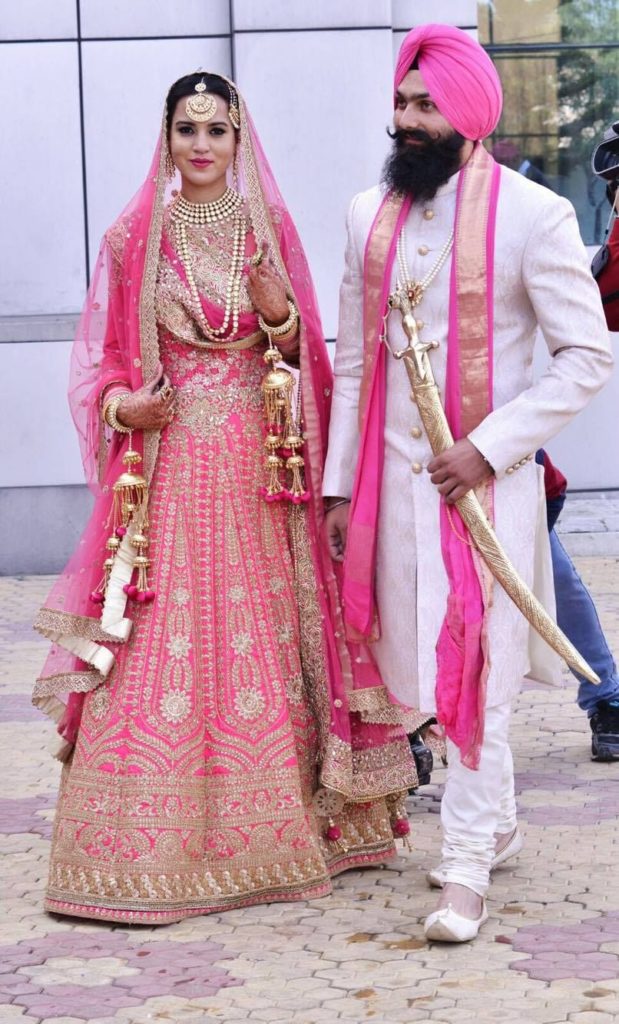